This exquisite but elusive bird was said to be extinct in 2004, but some miraculous sightings in Florida and Arkansas have confirmed the Ivory-Billed Woodpecker to be alive and well. But the danger of extinction still looms overhead, due to habitat loss and overhunting.

Panthera pardus orientalis is a very rare subspecies of leopard that only lives in the chilly forests of Primorye, a region in Eastern Russia. Its former habitat included parts of Korea and Northern China, but in those areas, this majestic feline has gone extinct. A census count in 2007 shows that only 14-20 adult leopards live, with only 5-6 cubs. This is due to poaching, global warming, and habitat loss caused by logging, road construction, and development.

Rhinoceros sondaicus is the most endangered species of rhinoceros in the world. There are roughly 40-60 rhinos left in on Java, Indonesia. The last of the population left in Cat Tien National Paek (Vietnam) was killed by poachers in 2011. This rhinoceros used to populate Southeast Asia and Indonesia, but has been hunted for its supposedly magical horn. Although protected, its current population may be too small to be able to repopulate.

There are about 100 species of lemurs on Madagascar, with all the species dying out fast due to logging and poaching. Several lemur species are listed as Critically Endangered by IUCN. (International Union for the Conservation of Nature)
Lepilemur septentrionalis currently lives on a mountain in northern Madagascar. The northern sportive lemur is tiny, weighing under two pounds. Despite its small size, it has great night vision. But even with its natural defenses, this lemur might not last long; there may be less than 20 still alive. 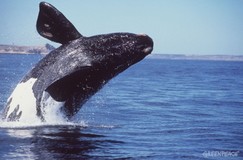 Eubalena glacialis is the world’s most endangered whale,  with only about 350 whales remaining. During the 1800s, hunters thought this was the “right”whale to hunt because when the whale dies, it floats, making it easier to bring back to shore, thus the name.
But even though this species is now protected, its numbers are dwindling. Whales get caught in fishing gear, and the accessibility of krill, which is what the whales feed on, has been affected due to global climate change. These two threats combined are lethal to whales.

Gorilla gorilla is the most numerous subspecies of gorilla, but is listed as Critically Endangered due to the fact that its population has declined by 60% over 25 years, with projected results of further decline. The cause for this steep drop in population is habitat loss, poachers, and the ebola virus, which is an incurable disease.

Demochelys coriacea is the largest turtle on Earth, with the largest range; swimming from the tropics to the sub-polar regions.
But according to IUCN, in 1984, there were about 115,000 female turtles. Fourteen years later, there are only about 20,000-30,000, with only more trouble ahead. Problems include egg theft, poaching, beach development, and erosion caused by global climate change. Leatherbacks sometimes die after eating plastic found floating in the ocean, which is mistaken for prey like jellyfish.

Panthera tigris altaica is the largest feline in the world, weighing up to 660 pounds.
Unlike most jungle-dwelling tiger subspecies, this tiger lives in forests of Russia’s chilly Far East. This cat thrives in the winter cold, which often plummets to-50°F. Due to persistent poaching, the tiger population dropped down to 40 different tigers. Ever since, this species has been protected, its numbers skyrocketing up to the 500s. Nevertheless, it still is vulnerable to illegal hunting, logging, and development.

Andrias davidianas is the world’s biggest amphibian, growing to be as long as six feet. It was formerly common in China, where it lives in forested streams sheltered by hills. It lays 500 eggs at a time in underwater burrows, where the male salamander guards the eggs. But the unique Chinese giant salamander has almost vanished do to its overexploitation as a food source. 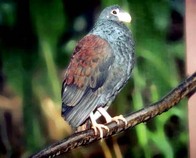 The little dodo bird has several nicknames such as the tooth-billed pigeon and the Manumea bird. Although just a foot long, this bird is actually a relative of the famous “large” dodo bird, which lived in Mauritius until it was hunted to extinction about 400 years ago. Extinction also threatens the little dodo bird: only about 100 remain, and they are dying out fast due to habitat loss and illegal hunting.
But don't ever forget that there are other animals that are in need of our help. The Pandas of Asia, the lemurs of Madagascar, and the koalas and kangaroos of the Australian Outback are very few of MANY critically or even slightly endangered species. And even if we almost never see marine creatures, THEY also need our aid. The Yangtze River dolphin is nearly extinct, and that's mainly due to the  fact that China has some VERY polluted water. So c'mon people! Let's do something about that!
Source: http://www.allaboutwildlife.com/ten-most-endangered-animals